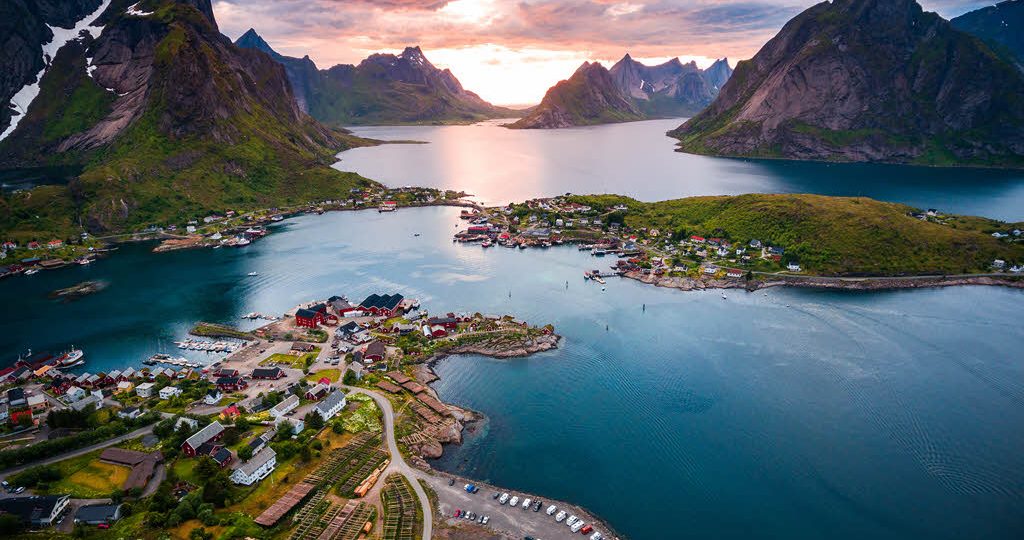 Not many have heard about the Lofoten Islands. Often the most stunning places in our countries, in the world, are the hardest to reach. But once you reach this north western part of Norway, your heart will soar  – for you shall see water that is as blue as the oceans in the Mediterranean, colourful fishing villages, majestic fjords, and the most exotic species of wildlife such as puffins, otters, sea eagles and more.

Lofoten is an archipelago (cluster of islands) in Norway known for its dramatic scenery. The four main islands of Austvagoy, Vestvagoy, Moskenesoy, and Flakstadoy, together with a number of smaller islands, lie so close together that from a distance they resemble a single mountain range. Surrounded by countless rocky islets, the islands are indented by numerous inlets and fjords with towering rock walls.

Lofoten’s cliffs are perfect for nesting seabirds  and other wildlife, while abundant marine life, such as migrating killer whales, provide another great reason to visit. In summer, the secluded beaches and snug fishing harbors draw sightseers, kayakers and campers, while in winter, seeing the fantastic northern lights and skiing are popular things to do.

Listed below are a few of the attractions on the Lofoten Islands:

This is the largest town of Lofoten. There are plenty of ferries and cruise ships from the mainland and elsewhere to Svolvaer. Most people begin their Lofoten adventure here.

An important fishing port, Svolvaer is a vibrant place, especially round the harbor with its many excellent cafes, bars and restaurants.

Also worth visiting is the Lofoten War Museum with its collection of WWII era war uniforms and artifacts. A unique experience is the Magic Ice, a space where ice sculptures depict life in Lofoten. 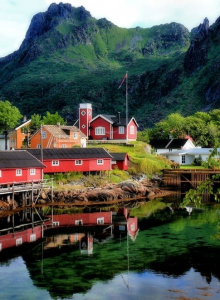 The North Norwegian Artist’s Centre displays changing artwork in varied media. In addition there are the numerous shops and galleries. For the really adventurous the Svolvaer Goat, an unusual twin- peaked rocky outcrop with fantastic views beckons. There are holidayers who actually attempt a jump from one peak to the other, called the Svolvaer Goat Leap. Some people are crazy enough to do a backward flip while others simply jump….with their cycle!

These remote islands , accessible only by boat, are home to a large colony of seabirds, including some three million puffins. The remoteness of these islands and the high crags make them an ideal location for these beautiful birds, some of which are so rare such as the storm petrels and the fulmars. 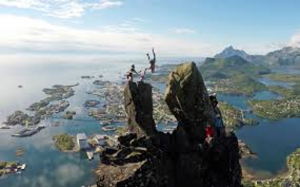 The fact that 25% of Norway’s seabird population lives on this island, is a huge incentive to nature lovers, but I’d just go to see the puffins, the clowns of the sea. With their bright orange beaks and matching feet, puffins are an endearing sight. 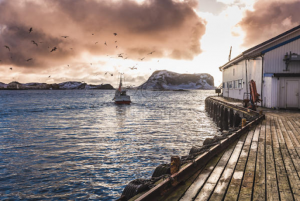 What is interesting is that their beaks change color in winter to a duller shade but brighten up by the mating season. They also mate for life, taking another partner only when the existing one dies.L aying just one egg a year, the parents together raise the chick , flying long distances over the sea, in search of food for their young. Their bills are designed to hold several fish at a time unlike other seabirds, so the little one has plenty to eat. 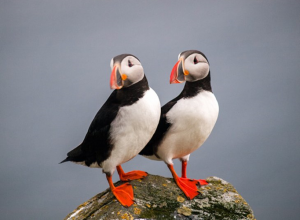 The Somvaer Lighthouse built in 1887 is worth a visit as it is Lofoten’s final Atlantic outpost.

Dramatically located, between steep mountains and the open sea, is Glasshytta in Vikten,at the very heart of Lofoten. Generations of glassblowers have worked from this beautiful stone and wood building creating masterpieces in glass. Inspired by the surroundings, Asvar Tangrand,the pioneer in glassblowing  in northern Norway ,has created colorful objects in glass.   Some of the glass objects have white quartz stone from the surrounding mountains in them giving it a distinctive arctic character. 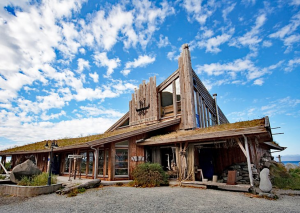 In recent years Glasshytta has become a popular attraction for travelers from all over the globe. The building blends in with the surrounding nature and has a traditional yet modern look. Here visitors can experience the art of glassblowing at close quarters .Drop in at their cosy café afterwards.

This popular tourist attraction is a picturesque fishing community located at Moskenesoy. Said to be the most beautiful village in Norway, it has traditionally been a favourite haunt of painters and climbers due to its spectacular fjord and mountain views.From the high ground above the village one can see one of the strongest whirlpools in the world. The more adventurous  can even take a boat ride  to see this up close! 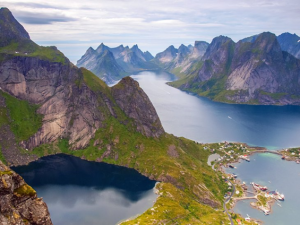 How to reach Lofoten Islands from India: You will have to first fly to the capital of Norway – Oslo. From here, you have to take a flight to Bodo. From Bodo, it’s a 3-4 hours ferry ride to reach the Lofoten Islands. A lot of effort to get here, but once you do, you’ll know why its so so worth it!

Visas from India: You just need a regular Schengen visa to visit Norway and Lofoten Islands

Top 5 Dishes To Eat In Italy 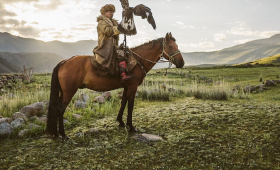 Top Things To Do In Kyrgyztan 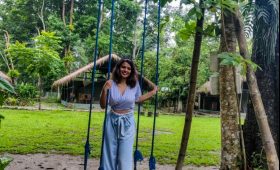