Armenia is slowly growing in popularity as a tourist destination. For those of us who are seeking a spot to relax and get away from the well beaten track, this is probably a great option.With its ancient history, dating back to 3500 years, the unique architectural style will fascinate you. Surrounded by tall mountains, one of which is the holy Ararat, where Noah’s Ark is believed to have taken refuge, the views are stunningly unbelievable. Listed below are some of the attractions that Armenia has to offer.

If you are landing at Yeravan, the capital city of Armenia, head out to the stately Republic Square, the heart of the city, designed by the famous Armenian architect Alexander Tamanyan in 1924. Around the square, are other important buildings, the History Museum of Armenia and the Government House.  Just ahead of the square is the Northern Avenue, the most modern part of the capital. Here you see modern office buildings and luxury hotels, fashionable shops and boutiques. Head down the avenue towards the Opera and Ballet Theater. Take in a ballet performance or an opera, or perhaps an evening listening to symphonic music. Or just soak in the ambience of a cultural slice of Armenian life.

Click here to check out some of the best day trips from Yerevan!

Just 20 km outside Yeravan is  Echmiadzin Cathedral in the city of Vagarshapat. A visit to Armenia is incomplete without a visit to this historical town. Armenia was the first country in the world to adopt Christianity and the Echmiadzin Cathedral was built to commemorate this. Built over the site of a pagan temple, this is the ultimate religious centre for all Armenians. It is also considered to be the oldest Cathedral in the world. Though it has a rich history and is a revered destination for Armenian Christians, the architecture is quite underwhelming.

GEGHARD MONASTERY AND THE GARNI TEMPLE

If you are not afraid of walking, take a hike through Armenia’s countryside, with its quaint villages, farms and the ruins of medieval forts and cathedrals, the high mountain passes and flowing rivers. Climb to the UNESCO World Heritage site, above the Azat river, and come upon the unbelievable Geghard Monastery, which is carved into a huge rock. This is a complex of several churches and tombs cut into the mountainside. The landscape is one of great natural beauty with the high cliffs acting as a protective backing to the north and a defensive wall surrounding the rest of the complex.

The Temple of Garni  is the only Greco- Roman building in Armenia with colonnades with 24 Ionic columns. Enjoy the view over the Azat valley. The temple is on the way to the Geghard Monastery.

Travel to the south eastern province of Vayots Dzor to see these amazing natural formations. Here you will find a vast cave system of limestone. The caverns are located near the city of Goris. Explore the cave homes carved into the hillside.

Interesting trivia: The world’s oldest leather shoe (5,500 years) and a winery, 6,100 years old were discovered in one of these caves- the Birds’ Cave (Areni1 cave) which is near the Gnishik stream.

Barely 8 km away from Areni village in the valley of the Arpa river, is the 13th century monastery of Noravank, surprisingly well preserved. A standing monument of the magnificent architecture of that period.

One of the most popular things to do  is to take the “Wings of Tatev” to reach Tatev Monastery.  Recognized as the longest reversible cableway by the Guiness Book of World records, this 5.7 km long tramway , will carry you over the deep and dangerous canyon of the surging Verotan river. The quickest, and most thrilling way, to reach the historic Tatev Monastery.

Prepare for an other- worldly experience as you proceed to the ancient town of Goris, in the picturesque province of Marz of Syunik. Here the natural elements of wind and water, have worked to carve out weird shapes from the volcanic rock. Stretching before you is a labyrinth of conical rocks and peaks reaching for the sky.  The sunlight bouncing off the peaks, gives it a magical fairytale setting.

Located 70 km east of Yeravan, Lake Sevan is the largest lake in the Caucasus Region. Sitting serene and blue in stunning surroundings, Sevan Lich, as it is called locally, is a place to just sit and soak in the beauty of nature.

Visit the Sevanavank Monastery nearby. One of the most remarkable sites of medieval architecture, attributed to Princess Mariam, daughter of Ashot I,  the founder of the Bagratuni dynasty, in 874 A.D. 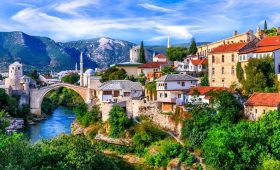 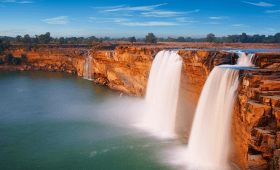 The Most Beautiful Waterfall In Each State Of India