Yesterday was a fantastic day for the mountaineering community at large. There are 14 mountain peaks in the world that are above 8000 metres. Nepali mountaineer, Nirmal Purja , made a world record climbing all of them, astonishingly in just six months and six days.

Known as the “Death Zone” as no life can exist there, Earth’s 14 highest mountains form the roof of the world. Incredibly, Pujra summited Mount Everest (the highest) and Mt. Lhotse (4th highest) on the same day, May 22. When I read the news, I was stunned and wondered how he managed both in a day. Deep into the night, I started reading about the distances between the two, looking up maps made by Everest explorers, reading all available material on the same. The images took me to the “Balcony” at 27,500 feet plus from where the final summit to Everest is made. It took me to Hillary’s step, named after Edmund Hillary, one out of the first two men to climb Everest in 1953. What the maps did not show but my imagination could conjure were brave men and women trudging up the snow, blizzards, ominous warnings whistling past their ears as their crampons dug into the snow. I felt the familiar itch to be back to some mountains.

The previous record for completing the summit of all 14 peaks was 7 years and 11 months, which shows how fantastic Nirmal’s achievement is. It isn’t just the speed we should marvel at, or the record itself, it is the intense desire of the heart and the indomitable spirit of a discoverer – some of the most enviable traits in a human being, that we should feel proud of. Aptly, Nirmal’s expedition was titled “Project Possible”.

It reminds me of George Mallory and his immortal quote. In the early 1900s, when so many men had tried summiting Everest and each had failed, some died, some suffered from frost bite and had to have their fingers and toes amputated, some became snow blind, a reporter quizically asked Mallory, “then why climb Everest?”. It was a valid doubt, why undergo so much pain, so much suffering just to climb a mountain.

Mallory’s reply was “Because it is there”. It summed up everything about the human spirit at large. That the desire to know, to learn, to educate oneself, to challenge oneself, to push, to stretch every sinew of your body to achieve a dream, would always be bigger and greater than the highest of physical discomforts.

In what makes this pursuit even more noble, while descending from Annapurna on 23 April, Nims led a successful rescue attempt to find another climber who had gotten separated from his expedition and was without food, water and an oxygen bottle for 40 hours. On 15 May, Nims and his team rescued two more climbers at a height of over 8400 metres, and sacrificed their own supplementary oxygen to help these two men!!

Nirmal Purja, you are an exceptional man. The whole world should be proud of you. We hope that this achievement gives more to the Nepali mountaineering community at large, and the Sherpas get more credit when westerners and others summit these magnificent mountains. You are an inspiration, not just for Nepalese, not just for every Sherpa who dreams of being rich or famous, but also to a boy like me who reads your story, and is immediately inspired to start reading about the Himalayas at 3 am, and want to run up one of those mountains happy as happy can be. 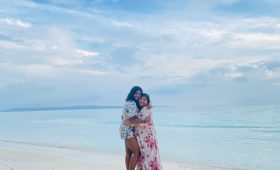