Lesotho is a landlocked country with South Africa bordering it from all sides. It is a small African nation that is relatively isolated from the rest of the world due to its highly mountainous terrain and landlocked status.

Originally named Basutoland, this country was renamed the Kingdom of Lesotho upon independence from the UK in 1966. Did you know that the inhabitants of Lesotho are called the Basotho? The singular term is Mosotho. Let’s check out some other interesting facts about this mountainous nation.

1. Lesotho is known as “Kingdom of the Sky”. It is a high altitude country and 80% of the country lies above 1800 m. The junction of the Orange and Makhaleng Rivers at 1,400 m is the lowest point in the country. It is also the highest lowest point of any country in the world.

Interestingly, Lesotho is the only country in the world entirely above 1,000 m thus people say it dwells in the sky.

2. Lesotho is ruled by a constitutional monarchy and is one of the 3 remaining kingdoms in Africa (the others are Morocco and Swaziland).

3. Lesotho is home to one of the scariest runways in the world. The runway of Matekane Air Strip is a mere 400 m long and ends in a cliff drop of about 600 m. The airport is typically used by charity workers and doctors to access surrounding villages.

4. Lesotho is a country within a country. It is completely surrounded by South Africa which makes it one of three enclave countries in the world. The other two countries of this kind are San Marino and Vatican City, both surrounded entirely by Italy

5. The Katse Dam in Lesotho is the highest dam in Africa. It is also the second largest double-curvature arch dam in the continent. It is 185 m high and 710 m in length.

6. Maletsunyane Waterfall in Lesotho is the highest single drop waterfall in Southern Africa. And it is also the longest commercially operated single-drop abseil (204 m) in the world.

The largest reptile on Earth once strolled in the country. The “Leosthosaurus” Dinosaur is named after Lesotho. It was an omnivorous dinosaur which evolved in the Early Jurassic period.

8. Have you seen how people are converting blankets and pillows into red carpet dresses these days? Well this is not a new concept in Lesotho as the traditional dress of the country is a blanket! The country experiences harsh cold winters and people here take their blankets everywhere. The blanket is not only used to protect the Basotho against the cold, but is also worn as a status symbol and cultural identification. The blanket is made up of wool and decorated with colourful patterns.

9. The highest pub in the continent is located in Lesotho. Located at the elevation of 2874 m or 9,429 ft, the Sani Mountain Lodge in the Sani Pass is regarded as Africa’s highest pub. The pass connects the countries of Lesotho and South Africa.

10 When we think about Africa, snow is not something that comes to mind. But in Lesotho, you not only see snow but also get a chance to ski here. Afriski is one of the few ski resorts in the continent.

11. Diamond mining is an important part of the country’s GDP and accounts for 9% of it. In 2018, one of the largest diamonds ever discovered was found in Lesotho. Weighing 910 carats and a size more than a baseball, it is the fifth-largest rough diamond ever found, and the largest in Lesotho’s history.

12. Lesotho is blessed with several rivers but in 2016, the country experienced the worst drought. People had to walk miles to collect water which made them appreciate the importance of water for their survival. Therefore water is considered and called ‘white fold’ in Lesotho.

13. Sesotho was one of the first African languages to develop a written form and has an extensive literature. This helped to boost literacy rates long before some African countries established formal schooling system. Today, Lesotho has one of the highest literacy rates in Africa with about 85% of the adult population being literate.

14. HIV is one of the biggest barriers to development in the country. Lesotho has the second highest HIV prevalence rate in the world. 25% of the population or one in four people in the country are living with HIV.

15. There are still cave dwellers in Lesotho. The Ha Kome Cave Houses form a group of cave dwellings made out of mud in the district of Berea. The caves are still inhabited by the descendants of the original Basia clan residing in the region.

Trip leader Sakshi’s Recommendations if you are visiting Lesotho:

Visit Tsehlanyane National Park, the largest national park in Lesotho. Surrounded by the rock-ribbed peaks of the mighty Maloti Mountains, the region is famed for its rare woodland habitats and high altitudes.

Go Abseiling in the Maletsunyane Falls. While truly spectacular in summer when the water flow is highest, in winter the water freezes, spraying the rocks with ice and forming a stunning ice cage over the pool.

Thaba-Bosiu is one of the most important historical sites in Lesotho and invokes a sense of identity for the proud nation. The Cultural Village near Thaba Bosiu provides an insightful glimpse into the traditions of the region. 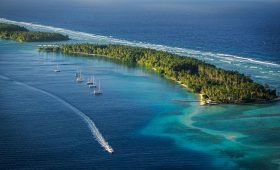