Home > Blog > Tales, Inspiration, Adventure > How Captain Nero Lost His Bags in Belarus – This Guy’s On His Own Trip
Liked this post? Share it with others.
Share

It was the August of 2017. I was midway through my fourth Europe solo trip. From Finland, I had taken the boat to Estonia and then gone down the road route to Latvia and Lithuania. And now I was flying to Belarus. When I reached Minsk airport, I headed straight to immigration. They looked at my passport and asked me for my return ticket. If you are Indian and want to go to Belarus on a Schengen visa, you are only allowed entry for five days, and you must have a return ticket when you enter the country. I promptly took out my phone, and showed them the ticket. The officer stared at my passport for a long time. I understood he hadn’t seen many Indians coming to his country. After sometime, he shook his head and told me that I needed to have a print-out copy of the ticket. I told him that I if they needed a hard copy, they should direct me to a printer. He shook his head and told me that it wasn’t possible. Repeated conversation didn’t seem to help, neither did the coming of one more officer. Suddenly a guard was summoned and he rudely ordered me to go sit on a chair. And he insisted I would have to fly back to Lithuania on the next flight.

Dismayed, I tried to convince him that I had booked hotels for the next four days. I hadn’t, actually. I never book anything in advance. It’s the only way to live in the moment. But I kept at it, telling him it was unreasonable for them to send me back even though I had a ticket, but not a printout. He became even more aggressive so I shut up.

Having nothing to do, and being asked to just sit indefinitely, I took out my laptop and started playing chess against the computer. This made the guard interested, and he asked me if we could play against each other. I grinned, and we started our match. When I came close to winning, he got up abruptly, said he had some “important work” and walked off. India 1 , Belarus 0, pal!

After almost three hours, someone from the airline company came, handed me a printout and immigration finally let me enter. The next stop was the Baggage claim, and my rucksack was nowhere to be seen. I ran all over the airport, spoke to everyone I could (hardly anyone spoke English), and they all claimed that there was no other bags except for the ones all the other travelers took away. My bag, they insisted, must be still at Vilnius airport (Lithuania) from where I had flown to Minsk.

After the unsuccessful search, I left the airport and set out for a hostel.I was tired. I was supposed to be out of the airport at 6 pm, but it was already 1030 pm. I had been treated aggressively, I had been detained without much reason, and now my bags were lost. The only thing remaining with me was my small bag which had just my passport and money. All my clothes and other stuff were in the lost rucksack.

When I reached the hostel that night, there was chaos. It was a family home that was disguised as a hostel. Absolutely no one seemed to speak English, and I barely managed to get a dorm bed. The owner, an old lady, looked kind, and gave me a towel. Well, not bad, now I had my passport, my money, and a towel for the next five days.

I woke up next morning, and called up Minsk airport Lost and Found. They declared that my rucksack hadn’t arrived at all at their airport. I called Vilnius airport, and they had no clue where my rucksack was.

Oh well, I thought to myself. I got onto my Facebook page, and wrote a post. I did not want to crib or rant about my bag. I have been traveling for seven years now, and only amazing things have happened to me. I have been helped all across the world, I have only received kindness for seven years, so the first time I had a misfortune happening to me, I didn’t want to be ungrateful and crib about it. So I wrote a post about my detaining, my rucksack getting lost, but how it was alright that it had happened, that nature always needed to maintain a balance, and that if I had a hundred good things happening to me across 43 countries in seven years, it was alright if there was an occasional mishap like now. And mostly I had just lost all my clothes and some food and shoes.

I wrote the post, and went out to see the city. I was back after two hours, and was astounded to see the reaction my post garnered. People from everywhere were commenting, some were calling me brave, some were calling me positive, and most said they were praying for the bag to come back to me. Astonishingly, the post went so viral that a lot of Belarussians also saw the post. Locals from Minsk were saying that they felt terrible about my ordeal, and that they couldn’t believe a traveler had been treated so badly. Some offered to show me their city, some offered to take me out for dinner, some offered to keep calling up the airport and finding out the status of my rucksack. 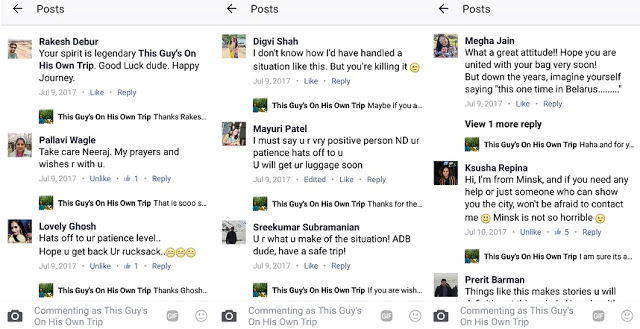 I wrote back to everyone. I was overwhelmed by how strangers from India, from Belarus, and from other countries could feel so empathetic. I was surprised that something as trivial as me losing my rucksack could make so many people pray and wish for me. Two of my friends, Shweta and Reshma took down the airport numbers, my baggage tag, and set about calling up the airport every few hours.

That is when I realized one thing. I knew that my bag was going to come back to me. I just knew it. When hundreds, thousands of people want something to happen in one united move, when there are so many people praying for one thing so unselfishly, when the world is by your side, the universe will always respond. I told a friend then that I did not know which corner of the world my rucksack was in, but I would get it back within these five days.

With Shweta and Reshma continuously in touch with the airports, I decided not to get a sim card. I wanted to see Belarus and I did not want a phone to distract me. A local, Dmitry, god bless him, kept calling up the airport too, trying to get updates about my bag. I would get all the messages when I  would connect to the hostel wifi.

A day later, the post had gone so viral that a local newspaper got in touch with me. They wanted to interrogate the immigration officers for being rude to me, a visitor to their country. I understood they wanted to do this, more for the story and the attention the newspaper would get, so I was not much interested in being a part of the story.

Day 3: The comments, the love, the prayers kept pouring in. Conversely, it also affected me a bit. I wanted to live in the moment. Forget about my bag. But people were so concerned, they would keep messaging me and asking me if it was found. After messaging for the hundredth time that it wasn’t found, I got a little irritated. To live in the moment, you must forget the past, and not worry about the future. Just enjoy what you are doing then.

For the first two days, I wore the same tee and jeans. On day 3, I took off my t shirt and wore only my jacket and jeans. I was convinced my bag would come back, and I wasn’t going to buy anything.

Day 4: There had already been two false alarms. Twice the airports said they found my bag, but the pics of the found bags were not mine. Reshma, Shweta did not give up. Nor did Dmitry. Nor did the hundreds of people still pouring in comments on Facebook and Whatsapp.

I was going to fly out to Poland the next afternoon. The reinforcements team (people calling up the airport) had one more addition – Lavanya. While I roamed about the streets of Minsk and silently admired the extremely hot women all around, Lavanya, Resh, Shweta and Dmitry kept communicating with the airports. I was not bothered about the bag any more, I wanted to just enjoy my last night in Minsk.

Early next morning, Lavanya called excitedly.  “Your bag is found”.  Still wary, I asked her to tell the airport to send a pic. Ten minutes later, she had whatsapped me a picture of my rucksack. It was finally found! 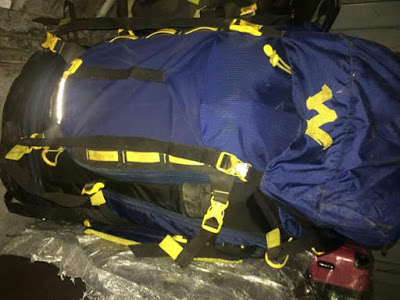 I went to the airport, also because I was to fly to Poland, collected my bags, did my check in and put up a post about my rucksack being found.

Again, love poured in from all over. People celebrated as if their own bag had been found.

Congratulatory messages kept pouring in, not just from followers in India, but other countries too. It was overwhelming to know how many people cared. In an adorable display, 8-9 friends of mine made my rucksack their whatsapp DP.

p.s 1 Like I said, I knew that my bag was going to come back to me. I just knew it. When hundreds, thousands of people want something to happen in one united move, when there are so many people praying for one thing so unselfishly, when the world is by your side, the universe will always respond. Heh, in four years of travelling, every single time, and I repeat every single time, things have dramatically become alright when I am in a spot. My faith in this theory is even more reinforced now.

p.s 2  The biggest hug to Shweta, Reshma and Lavanya –  my friends, who called up the airports for days for me because I did not have a local number.

p.s 3 To everyone, stray stories of travel mishaps should never deter you from traveling anywhere. The very fact that so many local Belarusians messaged me and offered all help shows how there are amazing people everywhere. So keep traveling, folks, to make such stories.