Everyone loves Captain Jack Sparrow and his eccentric ways. The first film was released in 2003, and was a smashing hit. The sequels followed and were enjoyed by the public. Small children (well, adults too) wanted to be pirates. There are themed parks based on the movies.

The movies were filmed in the beautiful Caribbean islands. We bring to you some of the most beautiful locations from the movies. Start planning the holidays in the pirate paradise.

You must remember the ‘Cannibal Island’ in the second movie of the franchise, ‘Dead Man’s Chest’. The villagers first treat Jack Sparrow like a god that confuses Will Turner as he was captured with his crew. Later it was revealed how they wanted to barbecue Jack and eat him. Jack as always escapes and the entire sequence was funny with fight involving a huge water wheel. That scene was filmed in Dominica, a mountainous Caribbean island nation. The island’s jagged coastline didn’t allow larger cruise ships, thus preventing the island from becoming over-developed. It is one of the most unspoiled islands in the eastern Caribbean.

Dominica is home to colourful coral reefs and sea tortoises, and is famous for it’s diving spots. The island also has beautiful rainforests and hiking around can be thrilling. Dominica was home to many pirates and claims to have one of the world’s largest undiscovered hoards of treasure. Treasure hunt anyone?

The Bahamas is a country comprised of 700 islands and over 2,000 rocks and cays. Nassau, the capital of the country was once a pirate hotspot. Blackbeard, the notorious pirate ruled the ocean here in early 1700s. You can check out the Pirates of Nassau Museum for information on actual brigands and Buccaneers, who once lived on the island.

Famous for the crystal clear water and spectacular beauty, these islands attract tourists from all around the world. Visit Grand Bahama where the second film Dead Man’s Chest was shot. The northernmost island of the Bahamas, Grand Bahama has some of the world’s clearest waters and is abundant with seemingly endless stretches of white beach and fabulous coral reefs. Johnny Depp loved the place so much that he bought his own island nearby.

St. Vincent and the Grenadines

This southern Caribbean nation was shot extensively in many movies from the franchise. The opening scenes of the first movie were filmed in Wallilabou Bay. It is the same port where Captain Jack Sparrow infamously set foot on the jetty just as his small boat sank beneath the waves. Restoration was done for the historic pirate bays to give the island an authentic feel.

Petit Tabac is a picture-perfect desert island with powder white sand and coconut palms. This was the place where Elizabeth set fire to Jack’s secret stash of rum to create a signal fire. Did you remember how beautiful the island was? Why would you want to run from such a pretty place? We say just dance to “Kaho Na Pyar Hai” heh. Go Bollywood!

We know what you are thinking. Puerto Rico is not a Caribbean island. The final beach scene for the fourth movie ‘On Stranger Tides’ was shot here. The scene where Sparrow leaves a furious Angelica stranded in the movie was filmed in island of Palominito. It is a small, uninhabited island near the east coast city of Fajard which has recently gained popularity after the movie was released. You can make a day trip to the island and enjoy the calm waters and white sand beaches.

Marigot Bay in Saint Lucia is the same site where Jack Sparrow sees the hanging skeletons of captured pirates in the first movie, ‘Pirates of the Caribbean: The Curse of the Black Pearl.’ The island looks is pretty and you won’t find the skeletons hanging anywhere. Saint Lucia is famous for the luxury resorts and the sunset cruises. One of the cruise ship ‘The Brig Unicorn’ was also used in the movies and was instantly famous. The ship got into an accident in 2014, and unfortunately sank. 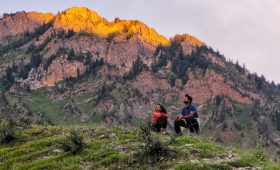 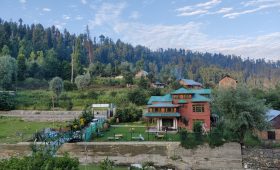 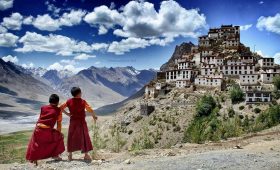