New Zealand is one of the most beautiful countries in the world. This island country is a magical landscape of wild snow-capped mountains, shining lakes and roaring rivers. No wonder the place was chosen to represent Middle-Earth.

If you are a fan of “Lord Of The Rings” series, you should definitely check out these places where the film was shot.

We know as: Mount Doom

Let’s talk about the RING! How would you feel if I tell you that you can visit Mount Doom – the place where the ring was forged and well ultimately destroyed too? Mount Ngauruhoe is an active volcano located in Tongariro National Park. The peak is sacred in Maori culture and you might be discouraged to climb it. Due to this reason, filming at the summit was not permitted; however, some scenes were filmed on its lower slopes.

As well as Mount Doom there are a whole range of other locations in the area where the movie was shot. Tongariro National Park was the main setting for the land of Mordor, and is home to phenomenal scenery. You can visit Mount Ruapehu, whose slopes served as the backdrop for Emyn Muil area. On the eastern side of the Tongariro National Park, you will find the Tukino ski field which formed the plains of Gogoroth in the movie.

We know as: Hobbiton

Matamata has been one of the most popular LOTR destinations, attracting tourists from all parts. This little town, located in Waikato, has acres of lush dairy farming landscape. Hidden within lush farmland and rolling green hills, it’s easy to see why this area was chosen to create Hobbiton, the Shire.

The set was mostly torn down after the Lord of the Rings movies, but it still drew fans wanting to see what was left. So, when they rebuilt the set for The Hobbit, they built it to last. You’ll have to book a tour in order to see it, and it is totally worth it. The attention to detail is incredible. It feels like a place where hobbits could be hiding behind every round door or colorful bush. And after the tour, you must visit the Green Dragon pub for a quick bite and a pint of hobbit-inspired ale (or ginger beer).

We know as: The Paths of the Dead

You must remember the scene in Return of the King, where Aragorn, Gimli and Legolas took the Dimholt Road to wake the army of the dead in Return of the King. It was filmed in Putangirua Pinnacles – a small national park located around the coast from wellington.  The pinnacles are the result of “badlands erosion,” meaning that all the softer rock in an area has been eroded away, leaving the harder rock behind which look like pillars, and are also called hoodoos.

This is a really cool area to explore even if you have never seen the movies as it is so eerie. You can explore the area and hike up “The Paths of the Dead”. There is a campsite nearby if you want to spend the night.

We know as: Edoras

Mount Sunday perfectly fits the description of Edoras. It feels as if Tolkien had visited this place before writing the book and director Peter Jackson brought his vision to life by creating the capital of Rohan here.  The set for the town is not here anymore, but the location is exactly what’s shown in the movie.

The wide valley and the snow capped mountains are all real. There was no CGI involved.  The hike to the top only takes about 30 minutes one-way and you will be awarded with some of the most stunning views of the surrounding plains.

We know as: Laketown

Okay, this one’s not part of the LOTR trilogy, but the stunning Lake Pukaki was chosen as the location for Laketown in The Hobbit: The Desolation of Smaug. The first thing you will notice is it’s incredible blue colour. The glacial waters that flow into the lake give it a vibrant turquoise/blue colour that really has to be seen to be believed.

With Mount Cook at the backdrop, this alpine lake is one of the most picturesque locations in New Zealand. The surrounding region is famous for star gazing. You can spend a couple of days here cycling, hiking, star gazing, and chilling by the lake. It feels magical!

Click here to read about some of the best adventure activities in New Zealand!

Have you read Neeraj Narayanan’s book – This Guys’s On His Own Trip yet? It’s right now #1 bestseller in the travel books category on Amazon. Click here to buy your copy! 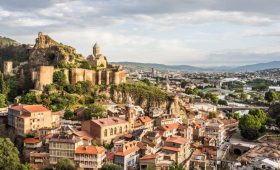 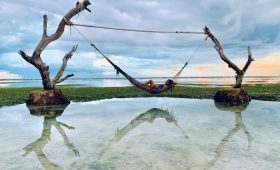 Things To Do In Gili Trawangan