It is half past one in the night, and the guard takes his own time to look at my passport. I stand nervously wondering if all is okay. Finally, he stamps it. I heave a sigh of relief and walk back to my bus, still groggy eyed. When I climb aboard, everyone is staring at me. There is not a single foreigner in the bus. Besides me.

Down the road, a sign reads “Welcome to Albania”.

They are all talking loudly. Finally a girl translates. “Where are you from?”, she asks me. When I say India, there are several “aahs”. One man is rubbing his chin, another is eyeing me. The chatter does not stop. The girl keeps translating the questions. “How far is India?” “Where are you coming from?” “Why are you visiting Albania?” To the last I answer “Because it is beautiful” and when the girl translates it back in Albanian, the bus erupts and everyone cheers. Everyone is smiling. The questions don’t stop however, and neither do the side jokes. And all this at 2-3 am. When I finally get off at my stop at Gjirokastra, everyone waves at me and wish me good luck. I think I will like this country.

The bus has dropped me in the middle of the city. My plan was to wait at the bus station till morning to save one night’s accommodation cost. But Gjirokastra, just like most of Albania, has no official bus station. A few men are staring at me from the other side of the road. I nod at them and make my way to an inn. After knocking several times, finally someone opens the door and thankfully I am given a room.

My bedsheet has a print on it. It says “Welcome to Albania”.

Ask anyone if they have been to Albania and mostly they will say “What? Where is that?” or “Is it safe?”. The latter is a valid question. Albania has mostly been at war for hundreds of years. While earlier, it was under the rule of the Ottoman empire, in the twentieth century, it was under Communist dictatorship for over forty years.

I go to sleep almost immediately. I have already been on the road for twenty nine days, first travelling solo and then leading a group trip through Turkey and Greece for two weeks. Now that my group has left, I am looking for some serious adventure and am planning to hitchhike and bus ride my way through the Balkans for a month. Bosnia and Serbia might not approve of my visa, so I am planning to weave my way through Albania, Kosovo, Montenegro, Hungary and Romania.

I wake up the next morning and my balcony opens up to the town on the mountainside. I walk through the streets and my plan is to make my way to Gjirokastra castle. 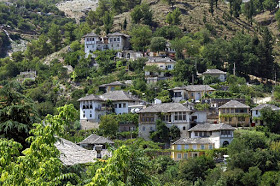 A lot of people are staring curiously at me.They have never seen an Indian before. Neither had any of the people in my bus the previous night. Can you imagine the gravity of that line? There are 1.2 billion Indians and they haven’t seen a single one!!!

Forget Indians, I don’t see any tourists at all in this town. And it makes me happy. I have been on too many backpacker trails and most travelers keep doing the same things, keep following the same circuits. It is the same cities and countries and pattern that all backpackers follow when they are in South East Asia, and it is the same places everyone does in Turkey. In Greece, the Europeans do a few more islands but we Indians only do Santorini, Mykonos, Athens and sometimes Crete.

Here there are no Germans, no Australians and no Japanese (the countries who travel the most). Here, unlike South East Asia or Bali there are no pancakes and waffles being served and hostels aren’t selling flyers or talking in an American accent. There aren’t any pub crawls in Gjirokastra. And these thirty days, that is how I want to travel. Not through capital cities, not through Europe’s most cosmopolitan cities, but through the countrysides and towns of the nations that most people don’t visit.

Nobody here understands English. But I don’t need to speak the language. I ask “Castle” and they all smile and point in a direction. I keep asking people the same thing, and they keep smiling and pointing.

And such is the beautiful irony in this land. It is not just the land of Enver Hoxha, the Dictator who built 700,000 military bunkers in the country for fear of invasion. It is also the birth place of Mother Teresa, the apostle of peace.

Till the 90s, only politicians were allowed to drive in Albania, and only 3000 cars were on the road. Today, everyone rides a Mercedes. The brand is so deeply entrenched that everyone, office goers, taxi drivers, mini bus drivers, food caterers all drive Mercs.

I walk on and am completely mesmerized by this town. It is as if it was plucked out of the medieval ages and planted in today’s world.

The houses, mostly in Ottoman style, are painted white and have grey tiled roofs and as they stand next to each other, on the slopes, with the majestic mountain in the background and the castle perched on top, the town looks like a perfect postcard. The street roads aren’t tarred (except for the highway and a connecting road), and are made of white brick and stone and run narrow and curved between the houses.

I pass a small bookstore and see the name “Ali Pasha of Teplene” on it. Arguably the greatest Pasha of the Ottoman empire, it is he who had added extensions to the castle and brought in advanced firearms and cannons. Earlier, when at the age of fourteen his father was murdered, Ali along with his mother formed a gang of brigands and looted all those who passed the mountain. As he grew older, he was first recruited by the empire to police the region and through way of favour, bribes and marriage, became Pasha (governor) in the region. Ali Pasha was a strict ruler and a vengeful one and his violent acts instilled fear in his enemies. Under him the Albanians emerged stronger and united and his soldiers would do anything for him.

I walk into the castle and fall in love with it immediately. I have always had a thing for stone castles and military fortresses. I can almost hear the horses gallop inside, can almost see the prisoners of war being brought in, can see the soldiers guard the walls. There is so much history in these walls.

It is fitting that the dials on the clock tower don’t work any more. Time, it feels, has actually stood still in this town.

I come out and walk over to Zekate House, an Ottoman house that belonged to the rich Zekate family in and was built in 1812 but was plundered in the early 20thcentury. Today, it serves as a modest museum house and though the riches, the jewellery, the paintings haven’t been returned, one can still see traces of what might have been when one sees the large rooms, the divans,  the viewing galleries and the many fireplaces *(in Albania, traditionally a house’s family’s richness was decided by the number of fireplaces in the house I counted nine in the Zekate House). The house is a lovely window into the lifestyle of a rich family during the Ottoman era.

I come out and walk down to Babameto Hostel – a lovely nineteenth century house that is now a hostel but has kept most of its style intact. A French girl is working on her laptop in the lawns and a dog is sprawled on the ground by her side. I sit opposite and we start talking. She has been here for  a month and she loves it. I wish I could just spend a month here, do nothing but read a book, play with the dog and bicycle to the nearby towns. I express that wish to her. An Albanian boy is listening to our conversation and laughs loudly.

“You will get bored here in Gjirokastra”, he says “nothing ever happens here.”

I look around, down the mountainside. Just a stone throw away lies the village of Gardhiq. In 1812, forty years after the men of that village kidnapped Ali Pasha’s mother and sister and gangraped them for days on end, Ali Pasha had his revenge by killing 739 direct male descendants of the original sinners. Actually, I don’t even have to look that far. Gjirokastra is also the birth place of Enver Hoxha, the Dictator. He is also the man who ordered the confiscation of all the materials of the Zekate House.

The boy repeats, “It is boring, nothing ever happens here.”

I smile at him and nod my head.